All Disquiet on the Western Front 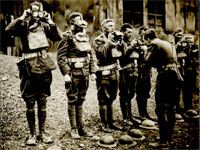 Why did World War I turn into a trench war on the Western Front? Was it the same on the Eastern Front?

Trench warfare was not an innovation of World War I, but it was never so prevalent in any other war before or since.

One reason that World War I became a massive trench war on the Western Front was that western Europe was densely populated. The opposing armies in the west were so vast that they could be deployed across the entire European continent, forming a continuous front. Early in the war, the opposing armies engaged in mobile tactics in an effort to outflank each other, but were countered as opposing troops were brought in to extend their lines.


The trench lines had the effect of turning western Europe into two fortresses whose armies laid siege to each other along a single border.

Throughout late 1914, after the first battle of the Marne, units of the opposing sides were deployed north and south of the already-entrenched armies and attempted to outrace each other and, in so doing, to turn their enemies' flank before the extending lines reached the sea. These attempts resulted in a series of battles, but neither side achieved a decisive breakthrough. From that point, the war on the Western Front devolved into filling in gaps in the lines, fortifying them, and experimenting with new tactics and weapons in order to break through.

The trench lines had the effect of turning Western Europe into two fortresses whose armies laid siege to each other along a single border.

In the east, the geography worked against entrenchment. The battle lines were much longer and the ground was harder. Trenches were more difficult to dig, and they could not be easily defended because forces could not be deployed along vast distances without making defensive lines easy to break. In the west, railroad lines were well established and could be used to shuttle forces back and forth rapidly in order to meet challenges along the front, but the transportation infrastructure in the east was much less developed.

The other reason that trench warfare dominated the conflict in World War I had to do with technological developments in weaponry, communications, and transportation, whose net effect was to strengthen the ability to conduct defensive operations and to make successful offensive operations much more difficult.

In previous wars, massed infantry and cavalry forces advanced or defended against each other across open ground. The small arms and other field weapons that had been available could certainly inflict losses on an advancing force as it came into range, but with enough men and horses, an advancing commander could hope to reach the defending army's lines and overwhelm them.

By World War I, however, small arms were much more lethal. They could fire accurately at far greater distances and they could be fired much more rapidly. Soldiers were now equipped with bolt-action rifles, hand grenades, and machine guns, and their field artillery was equipped with high explosive shells. The advancing army could also be slowed through quickly deployed lines of barbed wire, or through the use of flamethrowers or poison gas.

The advancing army's movements could also be tracked more efficiently. Airplanes did this job, and details of opposing troop movements were relayed to line commanders by rapidly strung phone lines.

The result was that an attacking force could no longer have much hope of surviving an advance over open ground against a defending force, especially an entrenched one. The opposing armies therefore fell into defending their territories along roughly parallel lines separated by a lethal "no man's land" between them.

The technology and tactics that could break this stalemate were not fully developed until the very end of the war and so were not effectively employed until the outbreak of World War II. They resulted in the use of highly mobile offensive forces that integrated infantry troops with newly improved tanks and close air support. This allowed an attacking force either to penetrate a defender's lines or to bypass entrenched fortifications altogether.

Gary Sheffield, ed. War on the Western Front.: In the Trenches of World War I. New York: Osprey, 2007.

"Our Boys in France Learning to Correctly Use Gas Masks," Keystone View Company.