With or Without Slavery? 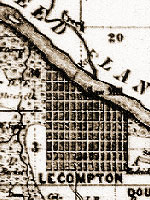 If the Lecompton Constitution version that would have allowed no further importation of slaves had won, would children born to the slaves already in Kansas still be considered slaves as well as their children into the future?

The proposed constitution was written in such a way that a vote "for the constitution without slavery" still allowed the residents of Kansas to keep the slaves they owned, while preventing new slaves from entering the territory.

Anti-slavery voters boycotted the referendum and consequently the "constitution with slavery" passed by a large margin. Kansas voters, however, eventually elected a new legislature and defeated the Lecompton Constitution. In 1859, they ratified the Wyandotte Constitution that outlawed slavery.

Manuscript of the Lecompton Constitution

Images:
"Forcing Slavery Down the Throat of a Free Soiler," 1856 political cartoon, Prints and Photographs Division, Library of Congress.

Detail of a map of Douglas County, Kansas Territory, 1858, showing the town of Lecompton.

Detail of an engraving of the town of Lecompton, 1859, Kansas State Historical Society.