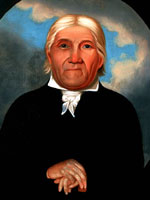 I hope you can answer this question. We can't agree on the correct pronunciation of “Conococheague.” Would you happen to know?

“Conococheague” is a Delaware Indian phrase referring to a particular creek, the main branch of which begins in Franklin County, Pennsylvania, and flows into Maryland. It crosses under the old Chesapeake & Ohio canal aqueduct near Williamsport, Maryland, and then into the Potomac River near Chambersburg. The name Conococheague, by extension, was later also applied to a mountain nearby.

The area drained in the watershed of the creek was the scene of fierce hostilities between the Delaware tribes and the early white settlers to the area that did not cease until a peace treaty was concluded in 1758.

The accepted pronunciation, according to AllRefer.com is “KAH-no-KAH-cheek,” with the accent on the penultimate syllable. And, listening to the folks at the Conococheague Institute in Mercersburg, Pennsylvania, pronounce it, I heard “KAH-no-KAH-cheeg.”

In 1822, the Moravian missionary, John Gottlieb Heckewelder (1743-1823), widely traveled among the Delaware Indians, sent to the American Philosophical Society a long descriptive list he had compiled of Indian names of geographical features. On his list (p. 373, as published by the American Philosophical Society in 1834) was “Conococheague,” which he then phoneticized as “Guneukìtschik,” with the accent on the penultimate syllable. He offered the translation as “long indeed, very long indeed.”

Visit the Conococheague Institute's website, to learn about its mission, "dedicated to promoting and interpreting the history of the French and Indian War in Pennsylvania, Maryland, West Virginia and Virginia."

The National Park Service operates the Williamsport Visitor Center, which is located at the confluence of the Conococheague Creek and the Potomac River.

John Heckewelder and Peter S. Du Ponceau, “Names Which the Lenni Lenape or Delaware Indians, Who Once Inhabited This Country, Had Given to Rivers, Streams, Places, &c. &c. within the Now States of Pennsylvania, New Jersey, Maryland and Virginia: And Also Names of Chieftains and Distinguished Men of That Nation; With the Significations of Those Names, and Biographical Sketches of Some of Those Men. By the Late Rev. John Heckewelder, of Bethlehem, Pennsylvania. Communicated to the American Philosophical Society April 5, 1822, and Now Published by Their Order; Revised and Prepared for the Press by Peter S. Du Ponceau, Transactions of the American Philosophical Society, New Series, Vol. 4, (1834), pp. 351-396. Many of Heckewelder’s manuscripts and published materials are at the Historical Society of Pennsylvania in Philadelphia.