Iroquois and the Founding Fathers 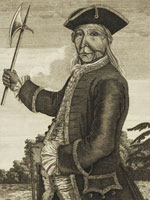 Did any Native American group influence the men who drafted the United States governing documents?

In 1744, Canasatego, leader of the Onondaga nation and spokesman for the Iroquois Confederation, advised the British colonists:

". . . We heartily recommend Union and a Good Agreement between you our Brethren. Our wise Forefathers established Union and Amity between the Five Nations; this has made us formidable, this has given us great weight and Authority with our Neighboring Nations. We are a Powerfull confederacy, and by your observing the same Methods our wise Forefathers have taken, you will acquire fresh Strength and Power."

Canasatego’s admonition and other evidence has led some scholars to believe that Native American, particularly Iroquois, governments served as models for the new nation’s government. Others refute that theory and argue that the framers of the United States Constitution and other documents did not need the example of Indian governments because they could refer to numerous English and Continental European political theories for their ideas.

The Iroquois Confederation is the oldest association of its kind in North America. Although some scholars believe that the Five Nations (Oneida, Onondaga, Cayuga, Mohawk, and Seneca) formed their Iroquois League in the 12th century, the most popular theory holds that the confederation was created around 1450, before Columbus’ “discovery” of America. These five nations bore common linguistic and cultural characteristics, and they formed the alliance to protect themselves from invasion and to deliberate on common causes. In the 18th century, the Tuscarora joined the league to increase the membership to six nations.

Those who support the theory that the First Peoples influenced the drafting of the founding documents point to the words of founders such as Benjamin Franklin, who in 1751 wrote to his printer colleague James Parker that “It would be a strange thing if Six Nations of ignorant savages should be capable of forming a scheme for such an union, and be able to execute it in such a manner as that it has subsisted ages and appears indissoluble; and yet that a like union should be impracticable for ten or a dozen English colonies.” Native American Studies Professor Bruce Johansen and American Studies Professor Donald Grinde, among others, argue that American colonists, in Johansen’s words, “drew freely on the image of the American Indian as an exemplar of the spirit of liberty they so cherished.” These scholars argue that the framers of American governments understood and admired Native American government structures, and they borrowed certain indigenous concepts for their own governments.

Other scholars are not convinced. Anthropologist Elisabeth Tooker, for example, argued that European political theory and precedent furnished the models for American Founders, while evidence for Indian influence was very thin. Although the concept of the Iroquoian Confederation may have been similar to the United States’ first efforts to unite alliance, the Iroquois constructed their government under very different principles. The member nations of the Iroquois League all lived under matrilineal societies, in which they inherited status and possessions through the mother’s line. Headmen were not elected, but rather clan mothers chose them. Representation was not based on equality or on population. Instead, the number of Council members per nation was based on the traditional hierarchy of nations within the confederation. Moreover, the League of Six Nations did not have a centralized authority like that of the federal system the Euro-Americans eventually adopted. These arguments are, however, intriguing. Curious to know more? Read the debate between Elisabeth Tooker and Bruce Johansen, and the articles in the William and Mary Quarterly Forum (1996) cited below.

Richter, Daniel K. The Ordeal of the Longhouse: The Peoples of the Iroquois League in the Age of European Colonization. Chapel Hill: University of North Carolina Press, for the Institute of Early American History and Culture, 1992.

See an exchange between Johansen and Elisabeth Tooker in Ethnohistory:
Tooker, Elisabeth. “The United States Constitution and the Iroquois League” Ethnohistory, 35 (1988): 305-336.

Canasatego’s speech to the British colonists at the Treaty of Lancaster negotiations, in Indian Treaties Printed by Benjamin Franklin, 1736-1762. ed. by Julian P. Boyd. Philadelphia: Historical Society of Pennsylvania, 1938.