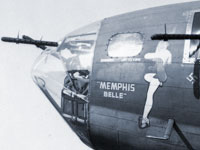 I'm doing research on the movie Memphis Belle and how historically accurate it is. Can you tell me what the Memphis Belle’s last mission was, because I keep finding conflicting information about it.

The Memphis Belle was the nickname of a U.S. Army Air Force Boeing B-17F that flew strategic bombing missions from England into continental Europe. As part of the 324th Bomb Squadron of the 91st Bomb Group, the plane flew 25 operational missions between November 1942 and May 1943, returning from all missions with its crew intact.

Most of the plane’s missions were flown by the same crew, but a few were not. Conversely, the plane’s usual crew, headed by Captain Robert K. Morgan, flew several missions in other B-17s. According to the 324th Bomber Squadron mission reports, the plane’s usual crew flew their 25th mission on May 17th, 1943, piloting the Memphis Belle to the Keroman submarine base, located in the Breton city of Lorient. There they bombed a platform used to pull U-boats out of the water. However, the aircraft itself did not complete its 25th mission until its next flight. That flight, manned by a different crew than its usual one, occurred on May 19th and sent the Memphis Belle to the Kilian submarine pen and bunker at Kiel, Germany. Its mission was to bomb an engineering and turbine engine workshop.

So, the 25th mission of the crew occurred two days before the 25th mission of the aircraft, which may account for some of the confusion about the “last mission.” After both crew and plane completed their respective 25th mission, the crew received the Air Medal with three Oak Leaf Clusters and the Distinguished Flying Cross. They were then ordered in June to fly the Memphis Belle back to the United States for a cross-country tour, the aim of which was to increase morale back home and to sell War Bonds.

The commanders who directed the bombing raids on Europe had decided to limit a crew’s tour of duty to 25 missions in order to increase morale among the crews: Casualty rates at the beginning of the missions approached 80% and when the Memphis Belle completed its tour (the first heavy bomber to do so), it was a joyful event, not only for the crew, but also for the entire air command and the American public.

With an Even Hand: Brown v. Board at Fifty
Best of History Websites
By Popular Demand: Portraits of the Presidents and First Ladies, 1789-Present
Manufacturers' Catalogs from the First Decade of American Automobiles
Lester S. Levy Collection of Sheet Music
Hawaiian Statehood