Pamphlets and documents from 1875 to 1900 highlight African American leaders and organizations. 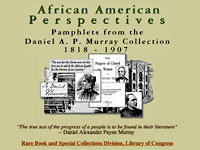 Nineteenth-century African American pamphlets and documents, most produced between 1875 and 1900, are presented on this website. These 350 works include sermons, organization reports, college catalogs, graduation orations, slave narratives, Congressional speeches, poetry, and play scripts.

The site also offers a timeline of African American history from 1852 to 1925 and reproductions of original documents and illustrations. A special presentation "The Progress of a People," recreates a meeting of the National Afro-American Council in December 1898. This is a rich resource for studying 19th- and early 20th-century African American leaders and representatives of African American religious, civic, and social organizations.

American Originals Part II
You Must Be This Old to Govern
The American Civil War: Total or Just?
Teaching the 20th
American Memory Learning Page
Red Hot Jazz Archive: A History of Jazz before 1930