Adam Rothman, Associate Professor of History at Georgetown University, teaches the history of the Atlantic world, slavery, and Jeffersonian America.

The Confessions of Nat Turner is one of the most valuable and enigmatic sources in all of American slavery. There is nothing else like it. On the one hand, it offers an unparalleled portrait of the leader of the most deadly slave revolt in the United States, providing insight into Nat Turner's religious world. On the other hand, Thomas Gray's authorship of the Confessions makes it difficult to discern Turner's authentic voice within it. One way to interpret the Confession is to view it as an inventive collaboration between Gray, who wanted to make money, and Turner, who may well have regarded Gray's appearance in his jail cell as an opportunity to cast himself as a Christian prophet and martyr. 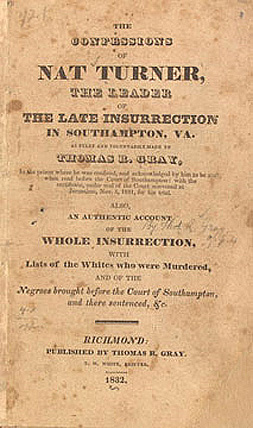