Katherine Mellen Charron is an Associate Professor of History at North Carolina State University. She is the author of the award-winning Freedom's Teacher: The Life of Septima Clark (UNC Press, 2009), and the co-editor of Recollections of My Slavery Days by William Henry Singleton (1999). Her teaching and research interests include African American, Women's, and Southern history.

Jesse Daniel Ames, a white Southern woman, was involved with the Commission on Interracial Cooperation in the 1920s and the founder of the Association of Southern Women for the Prevention of Lynching in 1930. This document reviews how African American disenfranchisement affected Southern politics, condemns mob violence that resulted in lynching, and chronicles a rare but successful suit for damages by the widow of a lynch victim in South Carolina. Other documents from this collection have been digitized and are accessible for classroom use. 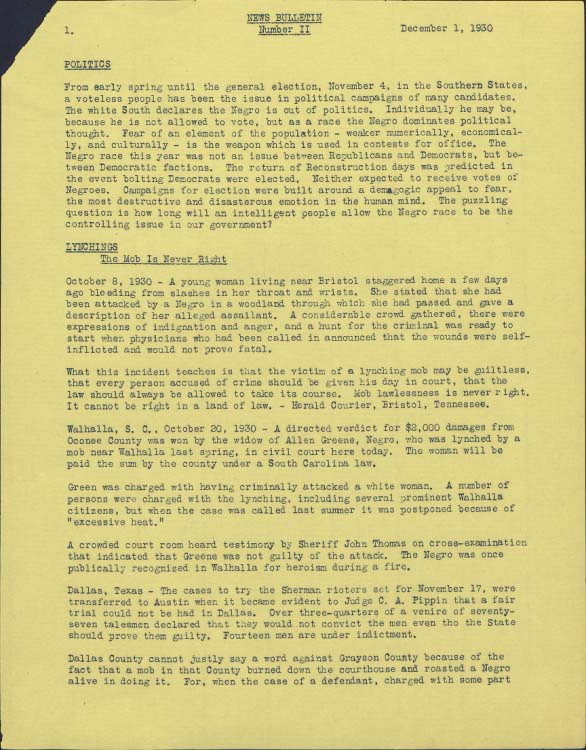 Excerpt from 1930 news bulletin: POLITICS From early spring until the general election, November 4, in the Southern States, a voteless [sic] people has been the issue in political campaigns of many candidates,The white south declares the Negro is out of politics. Individually he may be, because he is not allowed to vote, but as a race the Negro dominates political thought. Fear of an element of the population — weaker numerically, economically, and culturally — is the weapon which is used in contests for office. The Negro race this year was not an issue between Republicans and Democrats, but between the Democratic factions. The return of Reconstruction days who predicted in the event bolting Democrats were elected. Neither expected to receive votes of the most destructive and disasterous [sic] emotion in the human mind. The puzzling question is how long will an intelligent people allow the Negro race to be the controlling issue in our government? LYNCHING The Mob Is Never Right October 8, 1930 — A young woman living near Bristol staggered home a few days ago bleeding from slashes in her throat and wrists. She stated that she had been attacked by a Negro in a woodland through which she had passed and gave a description of her alleged assailant. A considerable crowd gathered, there were expressions of indignation and anger, and a hunt for the criminal was ready to start when physicians who had been called in announced that the wounds were self-inflicted and would not prove fatal. What this incident teaches is that the victim of a lynching mob may be guiltless, that every person accused of crime should be given his day in court, that the law should always be allowed to take its course. Mob lawlessness is never right. It cannot be right in a land of law. — Herald Courier, Bristol, Tennessee. Walhalla, S.C. . October 20, 1930 — A directed verdict for $2,000 damages from Oconee County was won by the widow of Allen Greene, Negro, who was lynched by a mob near Walhalla last spring, in civil court here today. The woman will be paid the sum by the county under a South Carolina law. Green [sic] was charged with having criminally attacked a white woman. A number of persons were charged with the lynching, including several prominent Walhalla citizens, but when the case was called last summer it was postponed because of "excessive heat." A crowded court room heard testimony of Sheriff John Thomas on cross-examination that indicated that Greene was not guilty of the attack. The Negro was once publically [sic] recognized in Walhalla for heroism during a fire. Dallas, Texas — The cases to try the Sherman rioters set for November 17, were transferred to Austin when it became evident to Judge C.A. Pippin that a fair trial could not be had in Dallas. Over three-quarters of a venire [sic] of of seventy-seven talemen declared that they would not convict the men even tho [sic] the State should prove them guilty. Fourteen men are under indictment. Dallas County cannot justly say a word against Grayson Country because of the fact that a mob in that County burned down a courthouse and roasted a Negro alive doing it. For, when the case of a defendant, charged with some part. . .