Will Thomas, University of Virginia 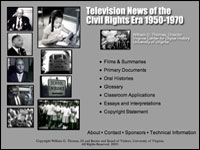 In the 1950s and 1960s, the Civil Rights Movement was covered on news stations around the country. This website provides 230 of these video clips from two local television stations in Roanoke, Virginia. Clips feature both national events, such as the speeches of Martin Luther King, Jr. and John F. Kennedy, as well as footage of local school desegregation, protests, and interviews on the street.

Accompanying this footage are 14 oral histories (several from Virginians with firsthand knowledge of the Prince Edward Public Schools closing), and 23 documents that chronicle the official development of Massive Resistance in Virginia, in particularly the involvement of Senator Harry F. Byrd. "Essays and Interpretation" provides important historical context and analysis, with detailed pieces on "Virginia's Massive Resistance to School Desegregation" and the development of television news coverage of the Civil Rights Movement in Virginia and Mississippi.

The New World: A Stage for Cultural Interaction
Lewis and Clark: Maps of Exploration 1507-1814
The History of Sanitary Sewers
Ohio Memory: An Online Scrapbook of Ohio History
Voice of the Shuttle: Web Page for Humanities Research
Rare Map Collection