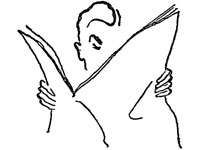 Some newspapers (The Piqua [Ohio] Daily Call, for example) have been digitized but charge quite a fee through the organization that provided that service. Is there any method for educators to access these without the fees?

No blanket method exists for researchers—whether they are educators or not—to access digitized newspaper archives for free. Digitizing or microfilming newspapers takes time and money, and unless an organization or company has received grant funding to do the work, it must find a way to pay for the expenditure. The National Digital Newspaper Program, begun jointly by the NEH, the Library of Congress, and various state-funded organizations has begun the huge task of digitizing U.S. newspapers published between 1836 and 1922, but the project is at a relatively early stage. The Library of Congress’ Chronicling America: Historic American Newspapers website is still merely a sort of prototype, although some newspapers can be searched there. Finding the archives of each newspaper presents a unique case. For example, the entirely free online, searchable archives of The Brooklyn Daily Eagle—from 1841 to 1902—is available via the Brooklyn Public Library website. Some very large or historically significant newspapers, such as The New York Times, The Chicago Tribune, The Liberator, and The Pennsylvania Gazette, have been digitized and access to them is available from commercial sources, such as ProQuest or Gale. College and university libraries often subscribe to various digitized series of newspaper and periodicals, and you could check with a local university library to see what they have. Typically, if you are not a student or a faculty member or staffer of the university or college, you will have to visit the library and search their online databases there. Larger public libraries sometimes also subscribe to such services and make them available online at the libraries themselves, free to those who use the workstations provided. Some large urban public libraries provide free access onsite to digitized archives of their own cities’ major newspapers. Some other commercial services that provide online access to digitized newspapers include NewspaperArchive.com and Ancestry.com. Public and college libraries often have microfilm copies of the archives of newspapers that are or have been published nearby. Regional historical societies or state libraries are other possible repositories for bound newspaper archives or microfilmed versions of them. In some cases, the microfilm might be available via Interlibrary Loan, but in other cases, researchers have to travel to the library to look at the microfilm (or the hard copy) there. In every case, before traveling to a library, researchers should call the library beforehand that (according to their catalog, online or otherwise) appears to have copies of the newspaper and have a librarian verify that the specific issues they wish to look at are indeed included among the issues that the library has. Some newspapers have digitized their archives—their “morgue files”—but only use the database they have created for their own research. Some others make some or all of their digitized archives available for a search fee. Calling the particular newspaper in which you are interested and pitching your case, explaining what you are looking for and how you would use the online access, might have some result, even if only having someone on staff at the paper search for a particular article or articles. Paying a small research fee for this is much cheaper and easier (depending on what you are looking for) than going through archives that consist of bound copies or microfilm. As for The Piqua Daily Call, the paper is still published and a free online searchable archive is available through its website back to 2001. A preliminary search of WorldCat (OCLC) and of the online catalogs of public and private libraries and historical societies in the region provides additional possibilities: The Edison Community College library in Piqua keeps a month’s current issues on hand. The Ohio Historical Society in Columbus has original scattered issues from 1886, 1892, 1896, 1905, 1914-1916, 1922-24, 1926-28, and from 1945-1956. It also has a microfilm copy of issues from 1914-1922. The library at Wright State University in Dayton has a microfilm copy of issues from 1946-1967. The Western Reserve Historical Society in Cleveland has some older scattered copies from 1884 through 1922. And the local history section of the Flesh Public Library in Piqua has a microform version of issues from 1883-1910 (with some gaps), and from 1968-1972.

Review of "Scholars in Action: Analyzing a Colonial Newspaper."

The History of Sanitary Sewers
American Leaders Speak: Recordings from World War I and the 1920 Election
Quantity of Soldiers—not Quality of Their Aim—Won Battles
Religious Orders of Women in New France
Voices from the Dust Bowl: 1940-1941
A Maritime Perspective on American Expansion, 1820-1890