New York Times articles from 1981 to 2001 follow the development of the AIDS epidemic. 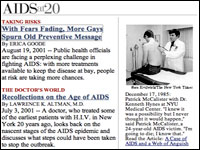 A 1981 reference to an unusual pneumonia in Los Angeles, California, by the Centers for Disease Control and Prevention marked the beginning of public discussion of the Acquired Immunodeficiency Syndrome, known as AIDS. More than 350 selected New York Times articles from 1981 to 2001 related to the AIDS epidemic are available on this website. Materials also include nine articles specifically related to the course of the epidemic's devastation in Africa.

There are nine videos, six multimedia presentations, five fact sheets, and four in-depth reports on such subjects as HIV medications, AIDS in New York City, HIV and teens, women and AIDS, the Federal response to the crisis, and the history of AIDS. The in-depth reports cover a diverse range of people affected by AIDS, including those of different ethnic backgrounds, and cover a wide range of locations within the U.S., including rural and urban areas.