Traces the history of the eugenics movement in the United States. 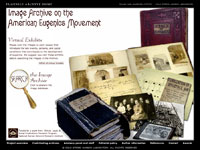 The history of the eugenics movement in the United States, from its inception in the decades following the Civil War through its height in the first few decades of the 20th century, is traced on this website. As we move into the age of genetics, this movement, that sought to filter "bad" traits from the human population, becomes increasingly important to understand.

The movement's history is told through a narrative divided into eight themes, including social and scientific origins, research methods and traits studied, flaws in these methods, ways in which the movement was popularized, immigration restriction, and marriage and sterilization laws. Each narrative is accompanied by roughly 10 primary sources—reports, articles, charts, legal documents, and photographs. These materials provide a succinct introduction to eugenics in the U.S.

In addition to the narratives, visitors can search or browse the Image Archive, featuring more than 2,000 primary sources, including documents, artwork, photographs, and more. Visitors may browse by topic, object type, time period, or the archive sources' originals are held by, or search by keyword or ID number. Note that primary sources cannot be downloaded from the Flash version of the Archive, though they can be from the HTML version of the site.

Civics Online
The Digital Classroom
Women in the Lab (and the Field)
Around the World in the 1890s: Photographs, 1894-1896
History Unfolded: US Newspapers and the Holocaust
Curating the City: Wilshire Blvd