What was life like for freed slaves returned to Africa? Read letters to former owners. 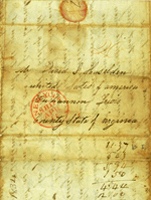 Founded in 1816, the American Colonization Society (ACS) advocated sending manumitted slaves and free blacks living in the United States to Africa. The first "repatriated" black emigrants landed in Liberia in 1821. They were not prepared to till the land and the local, displaced Africans were hostile. Most importantly, the American-born blacks were highly susceptible to malaria and yellow fever.

This website offers the opinions of surviving pioneers, including six compelling letters authored in 1834 and 1835 by Samson Ceasar, a freed slave, who wrote to David Haselden and Henry Westfall of Buchannon, VA. An additional 44 letters were sent by former slaves of James Hunter Terrell to Terrell's executor, Dr. James Minor, between 1857 and 1866. The diverse letters not only reflect the complex bonds between former slaves and masters, but underscore the persistently unequal relationship.