Access more than 500 webcasts from the Library of Congress. 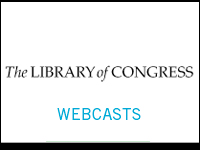 The section on government has 67 webcasts by current and former government officials, such as Senator Kay Bailey Hutchinson, George Shultz, and David Weinberger. Subjects include intellectual freedom, global democratic governance, and guardianship and the First Amendment. Moreover, the site offers 56 webcasts on culture and the performing arts and 305 webcasts on poetry and literature. There are also sections on religion, science and technology, and education. This website is a useful resource for information on historical subjects from the historians and authors who have written about them.