Listen to jazz from the '20s and '40s while learning about music greats and hot spots. 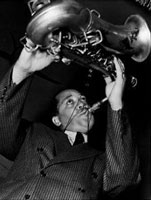 Also includes a 1,700-word article on the 18th and Vine district, "internationally recognized as one of the cradles of jazz"; a 1,500-word article on the first Kansas City jazz band to become known nationwide in the 1920s, the Coon-Sanders Original Nighthawks Orchestra; shorter essays on Kansas City clubs and nightspots; a 26-title annotated bibliography; and a 45-title discography. Small photos of people and places accompany some of the essays. A good introduction to this important center of jazz creation that will be of interest not only to jazz aficionados, but to those studying 20th-century urban and cultural history.