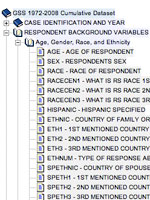 Within this site—designed primarily to aide social science researchers and analysts to construct large quantitative studies that can produce analytic results quickly—historians can find studies of importance relating to trends and shifts in American attitudes and opinions. The site presents 12 surveys on race and politics, Italian prejudice, health issues, and voter attitudes since 1952, among other topics.

Perhaps the most useful to historians of the late 20th century will be the General Social Survey, an "almost annual" study since 1972 that has interviewed U.S. households to produce a set of variables covering attitudes on an eclectic range of topics—from abortion to zodiac signs—that have been chosen by experts as "strategic for social science research" and related to public policy. Since 1982, surveys in other countries have replicated questions so that cross-national analyses may be achieved.

Remembering All Veterans
The Atomic Bomb: Hiroshima and Nagasaki
Shaping the Constitution
Finishing the Dream: Learning from the Civil Rights Era
History and Politics Out Loud
Indian Affairs: Laws and Treaties