Basic information and several images of 41 books once in Thomas Jefferson's library. 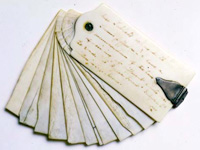 In the early 1800s, Thomas Jefferson owned the largest personal book collection in the U.S. After the Capitol and Congressional Library burned during the War of 1812, Jefferson allowed Congress to purchase his collection, which totaled more than 5,000 works and became the core of the Library of Congress's current collection. This website provides basic information on, and several images of, 41 of these books. They are divided by themes designated by Jefferson: "Memory," "Reason," and "Imagination," corresponding roughly to history, philosophy, and fine arts. In addition, visitors can explore lengthy selections from three of these works through the "Interactives" section: Mercy Otis Warren's History of the Rise, Progress, and Termination of the American Revolution, Niccolo Machiavelli's The Prince, and The Builder's Dictionary, an 18th-century handbook on building design and construction. This section features a powerful zoom function, allowing visitors to view the original text in detail, as well as a transcription function. Useful for those interested in political and intellectual culture in the early republic, as well as the history of the book.

Wisconsin Magazine of History
Reading Photographs: MacArthur and Hirohito
Magic, Illusion, and Detection in Turn of the Century America
Begging Leave to Inform the Publick
Slavery and the Making of America
Duluth Lynchings Online Resource: The Tragic Events of June 15, 1920