Is the Story of George Washington and the Colt a True Story? 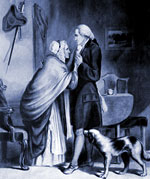 Like most people, I realize that the story about George Washington cutting down his father's favorite cherry tree is fictional. However, what about the story of Young George and the Colt?

This version of Young George and the Colt is attributed to Horace E. Scudder.

There is a story told of George Washington's boyhood—unfortunately there are not many stories—which is to the point. His father had taken a great deal of pride in his blooded horses, and his mother afterward took pains to keep the stock pure. She had several young horses that had not yet been broken, and one of them in particular, a sorrel, was extremely spirited. No one had been able to do anything with it, and it was pronounced thoroughly vicious as people are apt to pronounce horses which they have not learned to master.

The struggle was a sharp one; when suddenly, as if determined to rid itself of its rider, the creature leaped into the air with a tremendous bound.

George was determined to ride this colt, and told his companions that if they would help him catch it, he would ride and tame it. Early in the morning they set out for the pasture, where the boys managed to surround the sorrel, and then to put a bit into its mouth. Washington sprang upon its back, the boys dropped the bridle, and away flew the angry animal.

Its rider at once began to command. The horse resisted, backing about the field, rearing and plunging. The boys became thoroughly alarmed, but Washington kept his seat, never once losing his self-control or his mastery of the colt. The struggle was a sharp one; when suddenly, as if determined to rid itself of its rider, the creature leaped into the air with a tremendous bound. It was its last. The violence burst a blood-vessel, and the noble horse fell dead.

Before the boys could sufficiently recover to consider how they should extricate themselves from the scrape, they were called to breakfast; and the mistress of the house, knowing that they had been in the fields, began to ask after her stock. "Pray, young gentlemen,'' said she, "have you seen my blooded colts in your rambles? I hope they are well taken care of. My favorite, I am told, is as large as his sire.''

The boys looked at one another, and no one liked to speak. Of course the mother repeated her question. "The sorrel is dead, madam,'' said her son, "I killed him.'' And then he told the whole story. They say that his mother flushed with anger, as her son often used to, and then, like him, controlled herself, and presently said, quietly: "It is well; but while I regret the loss of my favorite, I rejoice in my son who always speaks the truth.''

Historians have not put much credence in the sorrel colt story.

Historians have not put much credence in the sorrel colt story. Washington's biographer Marcus Cunliffe identified the story as having appeared in print for the first time in an article written by Washington's step-grandson (the grandson of Martha Washington), George Washington Parke Custis, that was published in the United States Gazette on May 13, 1826, some twenty years after the cherry tree anecdote had first been included in the fifth edition of Rev. Mason L. Weems's The Life of Washington. Custis's article subsequently was reprinted in additional publications of the time, including the January 1827 issue of Casket (available online in the ProQuest subscription database "American Publications Series"), where it was entitled "The Mother of Washington" and identified as taken from the "'Recollections of Washington,' a new work by George W. P. Custis." That work, however, would not be published in book form until 1860, three years after Custis's death.

Custis, Cunliffe surmised, "did more than anyone to propagate the cult of the Mother of Washington. . . . [but] he does not carry conviction as a historian." Although the story was repeated in numerous accounts of Washington's life—a version sans didactic ending was reproduced as fact in a biography published as late as 1997—a few authors even in the 19th century expressed reservations about the story's veracity. Caroline M. Kirkland, in her Memoirs of Washington, published in 1857, cautioned, "The story of his having ridden to death a fiery colt of his mother's . . . sounds a little too much like a modernized version of Alexander's taming Bucephalus; so we shall not repeat it here." In his 1889 two-volume biography, Henry Cabot Lodge discounted the tale, commenting, "How Mr. Custis, usually so accurate, came to be so far infected with the Weems myth as to tell the colt story after the Weems manner, cannot now be determined."

. . . dedicated to "the pious, retired, domestic MOTHERS OF THE UNITED STATES. . . . for the use of their children."

Horace E. Scudder (18381902), a biographer, author of children's books, compiler of stories, and also the editor of Atlantic Monthly, was one of the many 19th- and early 20th-century authors who related the story, especially in books intended to educate children. David Ramsay dedicated his 1807 book on Washington to the "Youth of the United States," while John Corry offered his 1809 biography to "the Youth of America." James K. Paulding included the colt story, while omitting that of the cherry tree, in his 1835 biography of Washington dedicated to "the pious, retired, domestic MOTHERS OF THE UNITED STATES. . . . for the use of their children."

Historian Barbara Welter has noted that according to the dominant domestic ideology of the time, "mothers must do the inculcating of virtue [in children] since the fathers, alas, were too busy chasing the dollar." During the Revolutionary era, mothers especially were urged to instill virtue in their sons. In his biography of Washington that was published as part of the "Riverside School Library," Scudder asserted that Washington "owed two strong traits to his mother—a governing spirit and a spirit of order and method." The mother of the father of our country, Scudder related, "taught him many lessons and gave him many rules; but, after all, it was her character shaping his which was most powerful. She taught him to be truthful, but her lessons were not half so forcible as her own truthfulness." While Washington himself honored "my revered Mother; by whose Maternal hand (early deprived of a Father) I was led from Childhood," historians have found no evidence with which to validate the truth of the sorrel colt story.

François Furstenberg, In the Name of the Father: Washington's Legacy, Slavery, and the Making of the Nation (New York: Penguin Press, 2006), 289