On Telegrams and Telephone Calls 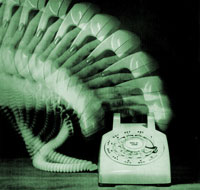 Why did JFK and George Wallace exchange telegrams regarding events in Alabama in 1963 when they could have communicated by telephone?

Telephone calls are immediate, transparent, personal, private, and leave no written record of what is communicated. And obviously, the caller and the one called have to be physically present on either end of the telephone line at the same time. Telegrams were different. And when the goals of two people were not necessarily the same, but in some respects antagonistic, the different characteristics of the telephone and the telegraph could be used to the advantage of one person or the other. Which is to say that, concerning the confrontation over racially integrating the University of Alabama, Governor Wallace did not necessarily wish to keep John and Bobby Kennedy completely informed about what he was doing and intended to do. In the aftermath of the bombing of the Sixteenth Street Baptist Church, however, his relationship with the Kennedy brothers changed.

There was personal contact between the Kennedy administration and Governor Wallace during 1963. At the end of April, Bobby Kennedy, then the U.S. Attorney General, sent Wallace a telegram asking to see him, and then subsequently flew to Birmingham for an hour-long meeting with him. President Kennedy and Governor Wallace also had face-to-face and telephone conversations in the run-up to their confrontation over integrating the Alabama schools. The president’s press secretary filed memoranda of these conversations in the White House files. In May, the President traveled to Muscle Shoals, AL, for a ceremony marking the 30th anniversary of the TVA, and flew from there to Huntsville in a helicopter with Wallace. During the flight they discussed segregation and the volatile situation in Birmingham.

Nevertheless, both sides used telegrams to ensure that the back-and-forth between them would take the formal shape of a printed record, an important consideration given the legal issues at stake in the unfolding events. But more than being tangible legal evidence, telegrams, unlike phone conversations, were suited to defining positions and responses to the public as well as to the telegrams’ recipients. Historian Dan Carter notes that Wallace released to the press the texts of “surly and ill-tempered” telegrams he sent the president during the drawn-out confrontation over integrating Alabama’s schools. Using telegrams, therefore, could be the result of a tactical decision as the sides drifted apart and as events drifted toward confrontation rather than cooperation.

Resorting to communication only by telegram could deliberately stall and frustrate your opponent because it filtered the communication into discrete, intermittent statements, questions, and answers. The telegram was not a good medium in which two people could privately mull things over, compromise, or negotiate.

As the confrontation at the University of Alabama came to a head, the Kennedys sent in federal marshals to help African American students safely register for classes. They knew the governor and his state troopers would somehow oppose them, but they did not know exactly what Wallace would do. For his part, Wallace “refused to tell the Federal Government any more about his plans or to answer phone calls from the Attorney General,” according to the transcript of a news program on file at the Kennedy Presidential Library. During this period, he even evaded federal marshals who were seeking to serve him with a subpoena to appear in court.

On June 8, RFK called Wallace to see if he could find out what the governor intended to do—Would he step aside when the students attempted to register or would the president be forced to summon troops, and if so, what would the governor do then? When the call reached Wallace’s office, the governor had his aides intercept it and say that he was “not available,” although in truth he evesdropped on another line, and stayed on the line silently while his aides brushed aside Kennedy’s questions about what he intended to do when the students appeared a few days later, on June 11, to register.

On that day, in fact, Wallace and a contingent of state troopers briefly blocked Deputy Attorney General Nicholas Katzenbach from escorting two black students into the university building where they were to be registered. The Kennedys, thought Wallace, “would be willing to strike a deal in which a governor could make a show of resistance while, in reality, bowing to the inevitable.” And indeed, without coordinating it with Wallace, that is what the Kennedy brothers did. They federalized the Alabama National Guard and confronted him again at the entrance to the building that afternoon and the governor, after making a public statement, yielded, whereupon the students were escorted into the building and were registered for classes.

Firing Off Telegrams to Politicians

Although the telegram is now no longer an option for communication (Western Union ended its telegram service in 2006 due to the internet-induced drop in demand), even private citizens used to telegraph their opinions to politicians and officials such as President Kennedy and Governor Wallace, rather than writing them letters, in order to register succinctly and formally the urgency they felt. Rev. Martin Luther King, Jr., for example, sent a telegram to Attorney General Kennedy in June, 1963, protesting “the beastly conduct of law enforcement officers at Danville [VA]” after police and firemen had attacked a prayer vigil outside the city hall with fire hoses and billy clubs. Other public leaders, business leaders, and civil rights activists also used telegrams to government officials to record their support or opposition or to register their outrage or agreement.

Compared to letters, telegrams were bound to reach their intended recipients in a timely fashion. When events unfolded rapidly, they could communicate in time for their recipients to respond to those events. This was particularly important, for example, in the hours and days after the bombing of Birmingham’s Sixteenth Street Baptist Church in September, as city police, state troopers, National Guardsmen, federal marshals and FBI agents moved into the area.

After the bombing, the relationship between Governor Wallace and the Kennedys changed

From Atlanta, after news of the bombing had reached him, Dr. King sent a telegram to Governor Wallace, telling him, “The blood of our little children is on your hands,” and sent another telegram the next day, after Dr. King reached Birmingham, to President Kennedy, warning him of the “worst racial holocaust this nation has ever seen” unless the federal government intervened. After the bombing, the relationship between Governor Wallace and the Kennedys changed: Their interests in solving the crime and keeping the peace nearly coincided, so Wallace had no reason to avoid phone calls from them.

In many cases, telephone calls, were even speedier than telegrams, but for a variety of logistical reasons, they could not always be counted on to connect the two parties—partly because there were layers of people between politicians and officials whose job it was to insulate them from unimportant contacts, and partly because they were in nearly constant motion, from one place to another, and from one appointment to another. These two facts added to the difficulty in ensuring that a telephone communication would take place very quickly (especially if the intended recipient was deliberately avoiding contact). On the other hand, a telegram to the president, for example, would be received speedily, and, if deemed important by his staff, would be forwarded to his attention wherever he happened to be.

Dan T. Carter, The Politics of Rage: George Wallace, the Origins of the New Conservatism, and the Transformation of American Politics. Baton Rouge: LSU Press, 2000.