Central Question: How do we define and understand resistance to slavery in regards to the 1822 trial and execution of Denmark Vesey?

Most textbooks do not even mention Denmark Vesey or the slave insurrection panic of 1822 commonly associated with him. The few that do mention him (briefly) tend to portray Vesey as a heroic rebel against slavery who met a tragic end.

Historians disagree about Vesey and his relationship to a Charleston slave revolt scare in 1822. Many see him as a hero who planned a major revolt against slavery. Others see him as a victim of a white conspiracy to kill black Americans as part of an effort to protect slavery.

Primary sources remain ambiguous regarding Denmark Vesey and the slave revolt he allegedly planned. Court testimony implicating him was often provided by prisoners who had been tortured, much of the evidence was secondhand in nature, and some white Charlestonians at the time openly doubted that the plot had ever existed. 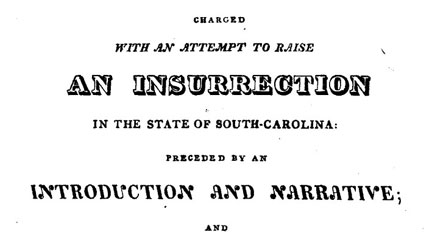 Most textbook authors have traditionally ignored or mentioned only very briefly Denmark Vesey and the 1822 insurrection plot in Charleston, SC, in their coverage and treatment of the development of slavery, its impact upon black Americans, the strategies employed by whites to preserve or strengthen the institution, and the strategies that were tried by black Americans to ameliorate life in slave society or to overturn slavery itself. A deeper and more nuanced examination of the trial records from the Vesey plot can complicate students' knowledge of how historians interpret the past as well as broaden their understanding of the politics of slavery, definitions of heroism and resistance to slavery, and the contours of daily life for slaves and free blacks in the antebellum South.