Central Question: What were the causes of the American Revolution?

Textbooks tend to emphasize a political and military story that makes the American Revolution seem like a unified, logical, and inevitable event.

Historians emphasize the diversity of participants, contradictions among their motives, and the variety of long-term causes of the American Revolution.

Primary sources reveal the diversity and complexity of the revolutionary movement. There was no single American Revolution, but many different American revolutions. 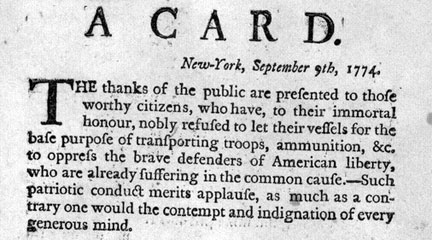 Most elementary and middle school American history textbooks continue to portray the coming of the American Revolution in terms of a series of discrete political and military events that culminated, more or less inevitably, in the separation of the North American colonies from Great Britain. Little attention is given to underlying social conditions, the diversity among participants, and the wide variety of intellectual traditions that contributed to the revolutionary movement. By ignoring the insights of new scholarship, textbooks fail to convey a sense of the long-term causes of the Revolution, the movement's tremendous complexity, or its limitations as well as its achievements.

To the Source!
Advisory Council on Historic Preservation
New York Public Library Digital Gallery
Jewish Immigration During the Revolutionary War
U.S. Holocaust Memorial Museum
How Much Have Federal Census Takers Made Through the Years?