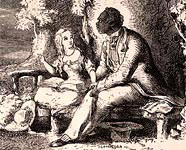 A third section focuses on responses from 1852 to 1930, including 25 reviews, more than 400 articles and notes, as well as nearly 100 responses from African Americans and almost 70 from pro-slavery adherents. "Other Media" explores theatrical and film versions, children's books, songs, poetry, and games. Fifteen interpretive exhibits challenge users to investigate how slavery and race were defined and redefined as well as analyze how various characters assumed a range of political and social meanings.

Texas and Mexico: Centers for Cultural Collision
U.S. Army
Digital Archive Collections at the University of Hawai'i at Manoa Library
U.S. Mint
Spain in the American Revolution
Trails to Utah and the Pacific: Diaries and Letters, 1846-1869