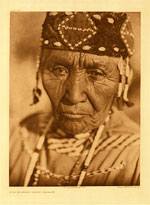 More than 2,000 photographs, taken by Edward S. Curtis for his work The North American Indian, are presented here. These striking images of North American tribes are considered some of the most significant representations produced during a time of rapid change, can be browsed by subjects such as persons, custom, jewelry, tools, and buildings. Each image is accompanied by comprehensive identifying data and Curtis' original captions. The voluminous collection and narrative are presented in twenty volumes. Photographs can be browsed by subject, eighty American Indian tribe names, and seven geographic locations. This site also features a twelve-item bibliography and three scholarly essays discussing Curtis' methodology as an ethnographer, the significance of his work to Native peoples of North America, and his promotion of the twentieth-century view that American Indians were a vanishing race. The biographical timeline and map depicting locations where Curtis photographed American Indian groups are especially useful.