What alternatives were suggested to dropping nuclear weapons on Japan? What is radiation poisoning?

The Atomic Bomb and the End of World War II

The Atomic Bomb and the End of World War II 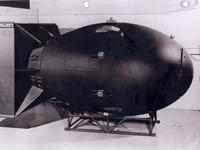 The site presents more than 90 primary source documents on the first use of nuclear weapons and the end of World War II. The documents are organized under eight topics that include background on the atomic project, target definition, debates on alternatives to first use and unconditional surrender, the Japanese search for Soviet mediation, the Trinity Test, the first nuclear strikes, and the problem of radiation poisoning. Additionally, the site's editor has provided commentary on some of the documents pointing out how they have been interpreted and a short introductory essay that explains the historical context of the documents and the questions they raise. A printable version of the briefing book is also available.

LexisNexis
Clinical Experiences
The Wizard of Oz: An American Fairy Tale
Posters from the WPA, 1936-1943
Open Parks Network
Geography of Slavery in America