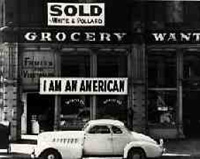 In 1942 President Franklin Roosevelt issued Executive Order 9066 authorizing the removal of more than 110,000 people of Japanese ancestry, two-thirds of whom were U.S. Citizens, into internment camps. This site, created for a class project at Massachusetts Institute of Technology, provides a gateway to brief essays and samplings of primary sources about the internment period from 1942-1945, a time line, oral histories, and photographs. There are links to 34 electronic essays and roughly 50 websites. Some of the more useful links are to the the National Archives and Records Administration, which documents the rights of American Citizens and actions of the Federal Government; the War Relocations Authority Camps in Arizona; the Museum of the City of San Franciso; the Japanese American Exhibit and Access Project; and Heart Mountain Digital Preservation Project. The site also contains personal reminiscences of life in the camp. Though many links on this site are useful for research on Asian-American history and the history of the World War II home front, this site should be used carefully. Some of the information presented as "fact" is highly controversial, some links present hearsay or speculation as fact, and several of the links are broken or obsolete.

Spanish Louisiana vs. Great Britain
From Slavery to Freedom: The African-American Pamphlet Collection, 1822-1909
New World Wonders
State of the Union
Why Did President Polk Want War with Mexico?
The Malcolm X Project