View the mid-20th-century art scene through the photographs of music and dance critic Carl Vechten. 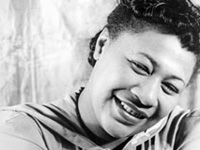 This collection presents 1,395 photographs by the American photographer, music and dance critic, and novelist Carl Van Vechten (1880-1964). The site consists primarily of studio portraits of celebrities, most of whom were involved in the arts, including actors, such as Marlon Brando and Paul Robeson; artists, such as Marc Chagall and Frida Kahlo; novelists, such as Theodore Dreiser and Willa Cather; singers, such as Ethel Waters and Billie Holiday; publishers, such as Alfred A. Knopf and Bennett Cerf; cultural critics, such as H. L. Mencken and Gilbert Seldes; and figures from the Harlem Renaissance, such as Langston Hughes, Countee Cullen, and Zora Neale Hurston.

More than 80 photographs capture Massachusetts and Maine landscapes and seascapes; others include eastern locations and New Mexico. Many photographs of actors present them in character roles. Searchable by keyword and arranged into subject and occupational indexes, this collection also includes a nine-title bibliography and background essay of 800 words on Van Vechten's life and work. A valuable collection for the documentation of the mid-20th-century art scene.