For your eyes only: photos and previously classified Cold War documents. 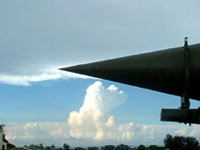 In October 1962 the United States and Soviet Union came very close to war over Soviet plans to place missiles on Cuban soil. A recent movie about the Cuban Missile Crisis, Thirteen Days, inspired the National Security Archive to make a group of declassified documents relating to the tense incident available. The site includes 17 full-text images of declassified documents, such as the Joint Chiefs of Staff's suggestions on American response to the construction of missile sites in Cuba, a CIA Intelligence Estimate, correspondence, memoranda, and a post-mortem on the crisis. Eight audio clips of White House security briefings, two of which are partially transcribed, are also available, along with 12 U-2 spyplane photographs of missile launch sites.

The site also offers a chronology of events from a characterization of relations between the United States, the Soviet Union, and Cuba in 1959, to the 13 days of crisis in October, 1962, and through 1992, when the last of five meetings on the crisis took place in Havana, Cuba.

A 1,000-word essay critical of the film Thirteen Days, a 1,500-word essay looking back on the Cold War, and excerpts from seven other documents and accounts of the crisis are also included.

The site provides the introduction (about 1,500 words) and the table of contents to The Cuban Missile Crisis, a documents reader edited by historians Lawrence Chang and Peter Kornbluh. This site is a good resource for students and teachers interested in Cold War relations.