Meet Linus Pauling, from his Nobel prizes to his "dirty laundry."

Linus Pauling and the Race for DNA: A Documentary History

Linus Pauling and the Race for DNA: A Documentary History 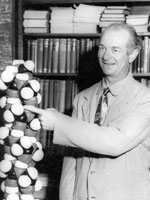 Designed to document American scientist Linus Pauling's role in the early 1950s race to discover the structure of DNA, this site contains more than 800 primary sources. Some 650 documents and photographs provide an unusually frank glimpse into Pauling's life; much of the correspondence in the collection is between Pauling and other front runners in the race (Watson and Crick, for example, and Rosalind Franklin). In addition to the documents and photographs, the site includes 16 of Pauling's published papers, 15 unpublished manuscripts and notebooks, and 22 audio and video clips of Pauling. There is a thorough chronology, which details the personal and professional dimensions of Pauling's life, including his troubles with the State Department and their refusal to issue him a passport on the basis of national security. Professional rivalries and personal jealousies, as well as victories and triumphs, are all documented in correspondence and in video interviews.

Although Pauling lost the DNA race, he was eventually awarded two Nobel Prizes. In addition to a typical search feature, Linus Pauling Day-By-Day allows viewers to learn about events and to examine selected correspondence relevant to any given day, from January 1952 through December 1953.