An excellent site for new study into the "white trash" demographic.

White Trash: The Construction of an American Scapegoat

White Trash: The Construction of an American Scapegoat 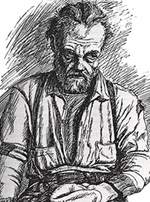 This site, created by a graduate student at the University of Virginia, provides a useful introductory and historical overview for the persistent stereotype of "poor white trash," a subject not unknown but surely under-studied. An 8,000-word essay, divided into five sections—"media," "religion," "race," "lifestyle" and "work"—forms the core of the site, though readers will find a handful of illustrations and pictures in each section. "Media" is best developed and most interesting. There author Angel Price has written about "Lil'Abner" and other comic strips, television programs such as the "Dukes of Hazzard," and works of literature that have both fostered and refuted images of poor white men and women. A handful of primary documents are also presented here, including brief selections by 19th-century humorists Augustus Longstreet and Simon Suggs. Readers will find, too, the full text of historian Henry Nash Smith's classic book, Virgin Land: The American West as Symbol and Myth. The background text, which draws from 29 scholarly and popular sources, is uneven yet generally reliable, particularly useful for students unacquainted with the topic. The site is somewhat difficult to read, owing to a dark navigating bar at the bottom.

Museum of Musical Instruments (MoMI)
Society for History in the Federal Government
Japanese-American Internment
Envisaging the West: Thomas Jefferson and the Roots of Lewis and Clark
The American Civil War: Total or Just?
Lakota Winter Counts