Forty diverse documents about the history, geology, and hydrology of the Platte River, from 1843 to the present. 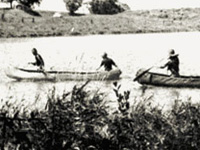 The Platte River begins in the Rocky Mountains and flows the length of central Nebraska before emptying into the Missouri River to the east. This website provides 40 diverse documents about the history, geology, and hydrology of the Platte River, ranging in date from an 1843 report by the U.S. Secretary of War entitled "An Exploration of the Country Lying Between the Missouri River and the Rocky Mountains," to a 302-page report published in 1993 by the Nebraska Geological Survey entitled, "Flat Water: A History of Nebraska and Its Water." The majority of documents date to the 1970s, many of which were published by government agencies such as the Missouri River Basin Commission or the U.S. Department of the Interior Geological Survey, detailing investigations into ground water usage and water resources management. There are also several documents on legal issues surrounding water rights and outdoor recreation. These materials are accompanied by 13 links to websites offering information about water resources, including the University of Nebraska's Water Center and Water Sciences Laboratory, as well as the Missouri River Basin Project, created to plan for the conservation and use of Missouri River water resources. Especially useful for those interested in the history of development projects surrounding water resources.