Another Kind of American Idol 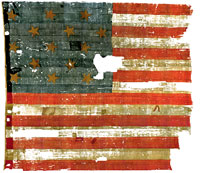 But as important as the flag and the anthem are to our national identity, it's no secret that singing the anthem is not for the faint-of-voice or for the monotone, although it's publicly sung in every imaginable venue by choirs, opera singers, pop and rap performers, and many, many, many more. Now, the Smithsonian offers visitors to the online Star-Spangled Banner exhibit a chance to show the world how it ought to be sung on YouTube.

The Smithsonian invites you to

Sing the national anthem your way! Upload your video to our YouTube group and enter to win the Star-Spangled Banner singing contest sponsored by the National Museum of American History and USA WEEKEND. The Grand Prize winner will be invited to perform the national anthem at the Museum in Washington, DC and at the Baltimore Orioles vs. Atlanta Braves game, both on Flag Day (June 14, 2009). The prize includes a trip for two to Washington, DC, including airfare and two nights hotel accommodations; tickets and transportation to a Baltimore Orioles baseball game; and $400 in spending money.

The exhibit explores the Star-Spangled Banner as history, as artifact, and as symbol.

But first, tour other elements of this online exhibit. The Star-Spangled Banner site looks at the flag as history, as artifact, and as symbol. It weaves narratives of the past with present-day meaning. The exhibit tells the story of the flag and invites viewers to explore the physical features and dimensions of this carefully-preserved remnant. Close-up zooms focus on the fabric, weave, and color and explain history and conservation efforts over the years.

Mini-essays and quizzes give context to the War of 1812 and explain why the Star-Spangled Banner and subsequent versions of the flag came to hold such meaning for Americans. Read the history of the American flag, and investigate rules and rituals surrounding its display and use.

The interactive feature, Share Your Story, encourages individuals to talk about the meaning of the flag in their own lives and to upload photographs illustrating that meaning.