What Happened to the Royal Family of Hawaii After the U.S. Took Over? 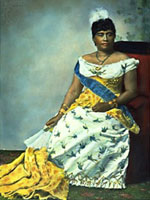 What happened to the royal family of Hawaii after the U.S. took over?

Hawaii's monarchy was limited by the 1887 Constitution of the Kingdom of Hawaii, which King David Kalakaua (18361891) signed under threat of force, and which was therefore often known as the Bayonet Constitution. It established a constitutional monarchy much like Britain's, but also transferred power through a redefinition of the electoral franchise to an elite class of American, European, and native Hawaiian landowners.

When Kalakaua died in 1891, his sister Lili'uokalani (18381917) succeeded him on the throne. Soon she made plans to restore the monarchy's veto power and other features of the pre-1887 Constitution. A group of American and European residents, in opposition to the Queen, organized themselves and solicited protection from U.S. Marines and sailors, which U.S. Government Minister John Stevens provided. Queen Lili'uokalani was deposed on January 14, 1893, and a provisional government was formed.

On February 1, Stevens proclaimed Hawaii a protectorate of the United States. On July 4, 1894, the Republic of Hawaii was founded and Sanford Dole became its President. A brief effort at the beginning of 1895 to restore the monarchy and Lili'uokalani to the throne was thwarted. Arrested and convicted for playing a part in the failed effort, Lili'uokalani was confined to house arrest in Iolani Palace, where she spent much of her time writing songs. She abdicated her throne eight months later, in return for the commutation of the sentence of her fellow conspirators. Later, she would write that her signature on the abdication agreement, which she signed "Lili'uokalani Domonis" (she had married Robert Domonis), invalidated it because, as a monarch, she had never acted under that name, but only "Lili'uokalani." Be that as it may, the government pensioned her off and she retired to her palatial home, where she died, at age 79.

Hawaii was a united kingdom under a single monarch only for eighty years, from 1810, when Kamehameha I (17381819) brought all the islands under his control, to the time when the monarchy became defunct under Lili'uokalani. During that time, the rules of succession evolved, to include not only the members of the families of Kamehameha and Kalakaua, but also adopted sons and daughters (Lili'uokalani had three) and members of a noble class recognized by Kamehameha as eligible to be rulers. Because the kingdom ended more than a century ago and because all these families have continued to proliferate, there are currently a large number of people who might be considered as heirs or pretenders to the Hawaiian throne, were it ever to be revived.

Gavan Daws, Shoal of Time: A History of the Hawaiian Islands (Honolulu: University of Hawaii Press, 1974).

The Tet Offensive
Inside an American Factory: Films of the Westinghouse Works, 1904
Toledo's Attic: A Virtual Museum of Toledo, Ohio
Premonition of Death
Time Archive, 1923 to Present
The Art of Migration