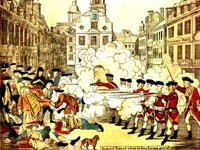 What was the document that Samuel Adams wrote right after the Boston Massacre in which he called the event a massacre?

Soldiers had been brought to Boston in 1768 to help enforce the Townshend Acts and keep the peace in the restive city. They were under orders not to use their weapons against the citizenry. The soldiers found themselves the object of Boston's hatred. The workers on the docks and at the city's ropewalk were particularly belligerent. They taunted and insulted the soldiers and brawled with individuals or small groups of them, sometimes using cudgels.

On the evening of March 5, 1770, on King Street, a soldier guarding the Customs House sent word for reinforcements because he was being confronted by a group of rowdy men and boys, some of whom had armed themselves with staves. A small detachment of soldiers appeared as the crowd in the street also increased. Taunting and jeering led to physical fighting and some of the soldiers then fired into the crowd, killing five people.

The following day, a town meeting was held in Boston's Faneuil Hall and a committee of 15 men was formed, among them Samuel Adams. Adams had already addressed the crowd, although what he said was not recorded. Accounts of the events of the few days after the affair described Adams as the "controlling mind" of the committee, even though he was not always officially in its front rank. The committee immediately met with the lieutenant governor, Thomas Hutchinson, and demanded that the troops be removed from the city.

The town meeting did not dissolve, but instead adjourned, giving a warrant to a committee—formally consisting of James Bowdoin, Joseph Warren, and Samuel Pemberton but also consisting of four others, including John Hancock and Samuel Adams—that they investigate the affair and report back to the reconvened meeting on March 12. The committee's warrant read, "What steps may be further necessary for obtaining a particular account of all proceedings relative to the massacre in King-street . . ." This is the first evidence of the mention of the word "massacre," but newspaper accounts a week after the incident said that on the day following the incident, as people in the surrounding regions heard news of the "massacre," they began streaming into Boston.

The committee's report, delivered to the reconvened meeting on the 12th, gave an account of the affair. It contained the sentence, "An inquiry is now making into this unhappy affair; and by some of the evidence, there is no reason to apprehend that the soldiers have been made use of by others as instruments in executing a settled plot to massacre the inhabitants." The members of the committee, including Samuel Adams, signed the report.

The members of the committee, including Samuel Adams, signed the report.

The committee may have admitted that there was no evidence that the affair was the result of a premeditated "plot to massacre the inhabitants," but it did not hesitate to characterize it as a "massacre." Newspaper and broadside accounts, dated from the day of the committee report, called it "this horrid Massacre." Paul Revere's well-known and somewhat inaccurate colored engraving of the affair, which was labeled, "The Bloody Massacre," was issued on the same day.

The town meeting's committee, of which Samuel Adams was a member, then wrote a longer account, called "A Short Narrative of the Horrid Massacre," and submitted it a week later under the signatures of the formal heads of the committee, Bowdoin, Pemberton, and Warren. The meeting accepted it and had it printed, and copies of it were immediately sent to England in order to give an account of the events that would help shape the reporting of the event there. Calling it a "massacre," rather than a "riot," a "tragedy," or a "disturbance," as the soldiers and colonial officials were inclined to do, went far toward absolving the residents of Boston of blame for the incident and indicting public opinion against the soldiers. In addition, calling it a "massacre," rather than a "murder," suggested that it might have been organized, and not a spontaneously unfolding event.

Aside from that, however, the word "massacre" had a particular resonance that was well understood on both sides of the Atlantic. Calling the event in Boston a "massacre" evoked an event that had occurred two years earlier, in 1768, in a section of London known as St. George's Fields. A crowd of almost 15,000 people gathered there to protest the imprisonment of John Wilkes, a radical member of the House of Commons convicted of libeling the King and his ministers. Soldiers had been guarding the prison, and under provocation, fired into the crowd, killing 7 people, including one young man mistaken for a rioter by several soldiers who pursued, cornered, and shot him in a stable. The St. George's Fields riot was quickly termed the St. George's Fields "massacre" by some of the London press.

From prison, Wilkes had corresponded with the Sons of Liberty in Boston, who were inspired by his radicalism. He had written them a letter referring to the "horrid Massacre," meaning the affair in St. George's Fields. In another letter, he suggested that the massacre had been planned in advance by the government, and that, for this reason, forces of a standing army were brought in to use against civilians. The members of the Boston Committee, in reporting that they found no evidence that the event in Boston had been premeditated by the government or the soldiers, may have been primed by Wilkes to consider that possibility.

After the St. George's Fields massacre, Dr. John Free, Chaplain of Christ Church, Oxford, preached a fiery sermon, denouncing the deaths as murders. The sermon was printed as a pamphlet and quickly found its way across the Atlantic. London broadsides, newspapers, and pamphlets also rapidly appeared in the American colonies, where they were reprinted in local papers. Essentially, many Americans believed that they were one in a cause with Wilkes and other English radicals who were being oppressed by arbitrary laws and an oppressive "ministerial conspiracy."

Historian Pauline Maier points to the reporting in the Boston Gazette of March 12, 1770, which said, "A more dreadful Tragedy has been acted by the Soldiery in King-Street, Boston, New-England, than was sometime since exhibited in St. George's Field, London, in Old England, which may serve instead of Beacons for both Countries." Some London papers also linked the two events.

After the Boston Massacre, John Lathrop, Pastor of the Second Church in Boston, preached a sermon entitled "Innocent Blood Crying to God from the Streets of Boston," which very deliberately echoed Dr. Free's earlier sermon.

Bostonians interpreted the events in their city as an eerie repetition of the "St. George's Fields Massacre," and their labeling of the affray in Boston as a "massacre"—and even "this horrid Massacre," echoing Wilkes' description of St. George's Fields—cemented that connection.

John Free, England's Warning Piece; shewing the supreme and indispensable authority of the laws of God; and the impiety, and fatal consequences of screening, and abetting murder. A sermon occasioned by the untimely death of Mr. William Allen the Younger who was most inhumanly murdered near his father's house, by an arbitary [sic] military power, on Tuesday, the 10th of May, 1768. London: printed for the author, and sold by W. Bingley; and Mrs Shepherd, at the end of Horsemonger-Lane, Southwark, where the murder was committed, 1768.

John Lathrop, Innocent Blood crying to God from the Streets of Boston—A sermon occasioned by the horrid Murder of Messrs. Samuel Gray, Samuel Maverick, James Caldwell, and Crispus Attucks, with Patrick Carr, since dead, and Christopher Monk, judged irrecoverable, and several others badly wounded, by a Party of Troops under the Command of Capt. Preston, on the 5th of March, 1770, and preached the Lord's Day following. Boston, 1770.

James Bowdoin, Joseph Warren, Samuel Pemberton, A Short Narrative of the Horrid Massacre in Boston: perpetrated in the evening of the fifth day of March, 1770, by soldiers of the 29th Regiment, which with the 14th Regiment were then quartered there; with some observations on the state of things prior to that catastrophe, Printed by order of the town of Boston. Boston, 1770.

Frederic Kidder, History of the Boston Massacre, March 5, 1770: consisting of the narrative of the town, the trial of the soldiers; and a historical introduction, containing unpublished documents of John Adams, and explanatory notes (Albany, N.Y.: Joel Munsell, 1870).

Images:
"A particular Account of the most Horrid Massacre…," Heading of a broadside printed in Boston, March, 1770; detail of Paul Revere's engraving, "The Bloody Massacre perpetrated in King-Street Boston on March 5th 1770 by a part of the 29th Reg't."