Provides more than 1.5 million pages of text in an effort to digitize more than 11,000 volumes and 100,000 19th-century journal articles. 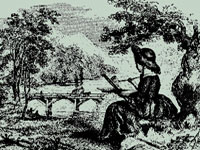 Also see the Cornell University branch of the project herehref>.

Together, these two websites provide more than 1.5 million pages of text in a collaborative effort to digitize more than 11,000 volumes and 100,000 journal articles from the 19th century. The websites present full-text access to 32 journals, including literary and political magazines such as Atlantic Monthly and Harper's New Monthly Magazine. The list includes specialized journals as well, such as Scientific American, Manufacturer and Builder, Ladies Repository, and the American Missionary. The websites also offer an abundance of novels and monographs.

A recent addition provides 249 volumes on New York City, some from the early 20th century. At present, the two collections remain separate and must be searched individually. The institutions plan to integrate their sites, however, and to include material from other major research libraries. Access to many "Making of America" texts is also available through the Library of Congress American Memory site, "The Nineteenth Century in Print".