The court proceedings surrounding the Haymarket Affair look at the event that led to the first "Red Scare" in America.

Chicago Anarchists on Trial: Evidence from the Haymarket Affair, 1886-1887

Chicago Anarchists on Trial: Evidence from the Haymarket Affair, 1886-1887 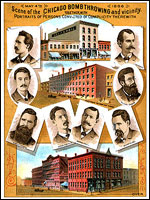 This collection of documents—roughly 3,800 pages of court proceedings—concerns the Haymarket Affair. This watershed event in the history of American radicalism led to the first "Red Scare" in America. Materials include autobiographies of two of the eight anarchists tried for conspiracy in the murder of seven Chicago police officers. The officers died after a bomb exploded at an anarchist meeting in May 1886, the day after two workers died in a struggle between police and locked-out union members at the McCormick Reaper factory. Four defendants were executed, despite lack of evidence connecting them to the bombing. The site presents approximately 221 newspaper clippings, 55 photographs, 19 letters, nine broadsides, and images of more than 20 artifacts. A linked exhibition, "The Dramas of Haymarket," furnishes a historical narrative and contextual interpretation. This website is valuable for the study of late 19th-century American radicalism, law enforcement, and political climate.