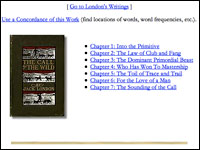 The full-text versions of more than 40 works by Jack London (1876–1916), a prominent early 20th-century writer who was also involved in the socialist movement, are available here. Materials include famous fiction, such as The Call of the Wild (1903), and lesser-known works, such as War of the Classes (1905), a collection of speeches London delivered on behalf of socialism. The website includes 20 novels, 19 short story collections, two collections of essays, three plays, and six additional published nonfiction works. The website is keyword searchable. In addition to providing the writings of Jack London, there is plenty of biographical and historical information about London and his times. Outside resources are suggested, divided into those suitable for students and those for teachers. Combining London's original works with other contextual materials provided by the site could be valuable for studying early 20th-century American literature and journalism and its relation to radical political and social currents of the time.