What better way to explore Johnson's presidency than through the words of his associates? 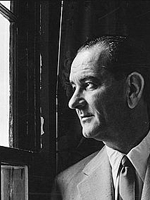