Take in the latest scholarship on the life of the first U.S. president. 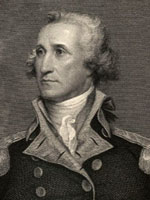 This site introduces users to the life of George Washington. Reflecting current scholarship, the site contains an Introduction, which is essentially a 4,000 word summary of Washington's life and career. The Timeline is a chronology of the milestones in his life, with a few references to national events. The Multimedia Room includes 11 audio clips of scholars discussing Washington's importance in the second half of the 18th century. Also included are four sound files of Pat Sajak reading memorial letters written by Thomas Jefferson and Winston Churchill, among others, and five video clips of Charlton Heston reading some of Washington's more famous letters and speeches (his Farewell Speech, for example).

The site contains a modest collection of 150 Washington letters, and a transcription of Washington's Book of Etiquette, which Washington himself transcribed when he was 16 years old. The letters are divided into pre-revolutionary, revolutionary, pre-presidential, presidential, and post-presidential collections; and include personal letters from and to Washington and his wife, as well as documents like presidential pardons, indenture documents, and land surveys. Teachers will find useful the 10 Lesson Plans (for grades 9-12), which are very detailed and include bibliographies. Listen to the audio review: .